Hello Friends, We Are Still Here!!!! 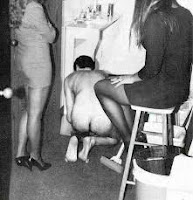 Things are slowly moving along for us. Mi Amor has been hospitalized 31 o
f the past 36 days. They have not started treatment yet for the main problem as we have spent 7 months trying to clear other complications first.
The last hospital stay was 21 days. I missed her terribly!! It is not the same at home without her. The dogs are company but they get tired of my stories and go to sleep.
As far as our male chastity lifestyle, we have not deviated from it throughout this whole ordeal. At one point Mi Amor said I really could remove it as she was very ill and couldn't really do a thing for me. I opted to stay caged and serve her even more.
We do have cameras in our home. One is in the living room. Every 3 or 4 days she would have me remove my cage in front of the camera and edge myself while she watched from her phone app. I was appreciative of any attention for sure. Twice she allowed me to masturbate to completion to ease a little stress. So we were still able to have some communication and activity.
I however did have some testy moments where I lost my cool and upset her. She realized that it had been months since any discipline had been carried out. 2 weeks ago she said I really needed a hard paddling and she was to the point of having me bring one to the hospital and do it there. That would have been so embarrassing!!
She then talked to her best friend and told her how I wasn't listening like I should and I was stressing her out at times with losing my cool. She asked her friend if she would carry out the punishment to help her. That was a surprise. Her friend is well aware of the lifestyle we live and said if she really wanted her to do it she would. However the word came that she was being released so it was not needed as Mi Amor planned on taking care of it herself once home.....  We did talk about what if it had been carried out. How would it change the relationship between her friend and I? We 3 have been very close for over 20 years. My thought was it would probably give her some power over me too and I would probably be doing extra foot service, massage and catering when the girls visit each other. She did ask Mi Amor 2 days ago if I wear her panties as she knows I am kept in panties all the time. Mi Amor told her we buy panties made for men that fit right.
I picked Mio Amor up Tuesday and got her home and settled. We spent the rest of the day talking and relaxing. Then to my surprise she said I could go down on her. I haven't tasted her sweet nectar in 2 months at least. It was heaven. Then she said I could remove my cage and enter her and finish inside her. Wow, I never saw that coming. Once done she reminded that punishment was do too.
So yesterday we did get to the paddles. She can't really stand to deliver the kind of punishment she wants to and her stamina is very low. She had me lie on my stomach and she sat crossed leg on the bed and used her shower brush on me. Hard, as she knew she wouldn't last long. It hurt for sure. She then called me back about 30 minutes later to administer another round. She is keeping it near her and said it will happen often for awhile at her discretion until I am back in shape.
We did order a fleshlight to incorporate in to our regimen to step up teasing and play together.  We haven't used it yet but it will be coming soon.....  I am just glad she is home and near me again.

Popular posts from this blog

Panties For Your Chaste Husband?

March 18, 2019
Just curious. How many keyholder/wives keep their chaste husbands in panties? I know I read of many who are kept naked at home which is how we started, though it didn't take long for me to be placed in panties.   I know we are kept nude or in panties for a reason. It definitely delineates the line of power between a keyholder and her caged husband. However I myself find a real difference.   Being kept naked at first was different. I never experienced this before. But in time Mi Amor was more attune to the idea of panties, one reason was so she didn't have to see at my asshole as I bend over while cleaning and doing my chores for her.   But the biggest reason is that it is quite humbling for a husband to have to wear panties in front of his wife while in the house. She is amused by it and enjoys the power she has over me. I often wonder if she thinks it is silly to see a grown man in frilly panties. But I guess that is part of it. Her caged husband in an embarrassing situat
8 comments
Read more